Posted by Phil Russell
· No Comments

What is Concrete?..and Why Does it Crack? 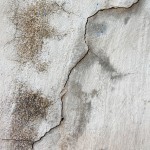 Quite often the terms cement and concrete are used interchangeably, but cement is actually an ingredient of concrete. Cement is made up of limestone, calcium, silicon iron, and aluminum. This mixture is heated to about 2,700 degrees Fahrenheit or 1, 482 degrees Celsius to form a substance called clinkers (looks like marbles). Clinkers are ground to make a powder and then gypsum is added. As a result of this, a powder is formed and this powder is referred to as cement.

Concrete is a mixture of cement, water, sand, gravel or crushed stone.
When you add water to cement and rock mixture a reaction called hydration makes the cement and water harden and it binds the aggregates into a rocklike mass. This hardening process forms concrete and this hardening process continues for years. As a result of this concrete gets stronger as it gets older.

If the Concrete Mixture is so Strong Why Does it Crack?

The main reasons are:

Shrinkage
The most frequent cause of cracks in concrete is shrinkage that occurs as the concrete dries. When concrete cures, the water that has been mixed with the cement begins to evaporate and this causes the concrete to shrink a little.

Support Problems
Some of the most severe cracks in concrete are caused by inadequate structural support. This lack of structural support may occur as the soil beneath concrete slab shifts or is eroded by natural elements such as wind and rain. It could also be caused by poor installation such as improper use of rebar or insufficient formwork.

The Spalling Effect
Spalling is a term given to concrete when it has a rough, flaky surface. Spalling is the result of hundreds of tiny cracks, which usually appear only on the surface of the concrete. Spalling typically occurs when too much water is added to the concrete mixture, or when the surface layer dries faster than interior layers.

Rust
If additional strength is required concrete may contain metal reinforcement, this will help increase the strength of concrete.  These reinforcement techniques may include wire mesh, rebar or steel beams. Should these materials begin to rust, the rust will cause an expansion in the concrete. This expansion may cause hairline cracks and small surface cracks. It is also possible that water could infiltrate these cracks and cause even more rust.

Of course, every case is different and if you have cracked concrete that you think is becoming a foundation problem or if you simply have a leaky basement or cracks in basement foundations you should have it reviewed by an expert.

Quite often repairs or solutions are not as expensive as you might think and the repair will be worth the peace of mind. In the following video, the house that is being repaired was getting ready to be sold and the owner wanted the foundation crack repaired properly. It is interesting to note that the foundation wall crack repair warranty is transferrable to the new owner. It doesn’t get much better than that.

If you have a foundation problem and would like to have it reviewed by an expert, call Phil Russell of CrackMaster Concrete 604-614-2615. There is no cost or obligation for this service.

Wet Basement? – CrackMaster Concrete – the Masters in Dry Basements Since 1994

Masters in Dry Basements Since 1994

CrackMaster Concrete is a full-service foundation repair and waterproofing company serving greater Vancouver and the Lower Mainland. We have been in business sinse 1994 and we have clients in most areas including, Abbotsford, Chilliwack, Langley, Maple Ridge, Port Moody, Surrey, Coquitllam, Port Coquitlam, Burnaby, New Westminster,Vancouver, North Vancouver Nanaimo and Victoria.

If you have a Leaky basement, are in need of a wet basement repair, or have a foundation crack, CrackMaster Concrete should be your first choice. CrackMaster’s years of experience and advanced foundation repair techniques will save you time and money.

Our Warranties are second to none and we have proven that we are in this business for the long hall. The CrackMaster Concrete lifetime warranty on crack repair is fully transferable to  new property owners. Just notify us in writing, within 30 days of the transfer.

If you have a wet basement in need of repair call Phil today. Our experience and advanced basement repair techniques will usually save you time and money. Our response time is quick and our Quotes are FREE with no hassle.

What Is a French Drain? 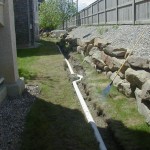 Example of one type of French Drain

A French drain is highly effective and you will find it in a variety of uses. Generally speaking it is a drain, normally along a footing, constructed of tile laid in a bed of gravel and designed to collect water and carry it away from a footing or unwanted location. Consequently the term French drain is often synoptic with the terms drain tile or perimeter drain.

Historically the French drain was as simple ditch with a pitch that was ample enough to run water away from the protected area. Today French drains are made with perforated pipe known as weeping tile. French Drains are commonly dug down 36-48 inches. Then 1 1/4” rock is placed at the bottom of the trench and a corrugated pipe is placed over this rock. Once in place, the trench is filled with more rock to approximately 4-6” below grade. The last 4-6” are then topped with soil and/or sod.

Landscaping textiles are used to prevent migration of the drainage material and to prevent dirt and roots from entering into and clogging the drainage pipes. The primary reason for the perforation in the pipe is to allow the water to drain along the full length of the pipe and to discharge any surplus water at the pipes end .
If land is flat a catch basin and discharge pump (sump pump) may be necessary to contain water

Phil Talks about the Misconception of Repairing a Concrete Crack That is Leaking!

Listen to an interview with Phil Russell as he answers the question …can a basement crack be fixed when it is leaking?   From the Question and answer series.
This video series will also be discussing wet basement repair and the water management systems designed to keep your house dry.

Phil talks about one of the most common misconceptions in wet basement repair.

What are Some of The Visible Signs of Foundation Settlement?

On the interior of the home look for:

On the exterior of the home look for:

Any of the above signs may indicate settling of the foundation. Some settling is normal and can be expected. If however if you feel there could be a future problem with a leaky basement and you may be in need of foundation repair or basement repair call an expert and get some advice.

I Am Finishing my Basement-I Have a Crack That doesn’t Leak. What Should I Do?

Call  CrackMaster and we will do an assessment for you. Generally speaking if you are wanting to protect your investments the crack probably should be repaired before you end up with a leaky basement. Hairline cracks can expand overtime as a result of freeze/thaw cycles.  You are better off being safe than sorry. The best thing you can do is call CrackMaster and let us discuss your options.

Chances are the cost of repair will be less than you think and for sure far less than trying to repair a flooded basement that has been finished.

CrackMaster is a master at wet basement repair and we are  more than pleased to make an assessement for your. Call Phil today at 604-614-2615  for a FREE no hassle quote.